Are call-only campaigns a good call for your AdWords account?

Other Articles by Beth Quigley

Back in February of this year, Google released ‘call-only campaigns’, their latest AdWords feature for mobiles. This new type of campaign functions in almost exactly the same way as a normal search campaign. However, there are two key differences: first, call-only ads can only show on mobile devices, and second, when a user clicks on the headline of a call-only ad they are given the option to call the business directly instead of clicking through to the website. Call-only ads differ from ‘click-to-call’ mobile ads for this reason, as click-to-call ads give you the option to click through to the website.

This new mobile ad format sounds particularly attractive for companies that value phone calls over website visits, as in theory every click you pay for results in a phone call. If phone calls are considered a conversion for your business, this essentially means call-only campaigns have a conversion rate of 100%!

This sounded too good to be true for us at Wolfgang, so back in March we decided to start testing out this new campaign type. The various stages of our test are nicely represented by Gartner’s Hype Cycle graph, which illustrates the maturity, adoption and social application of new technologies. 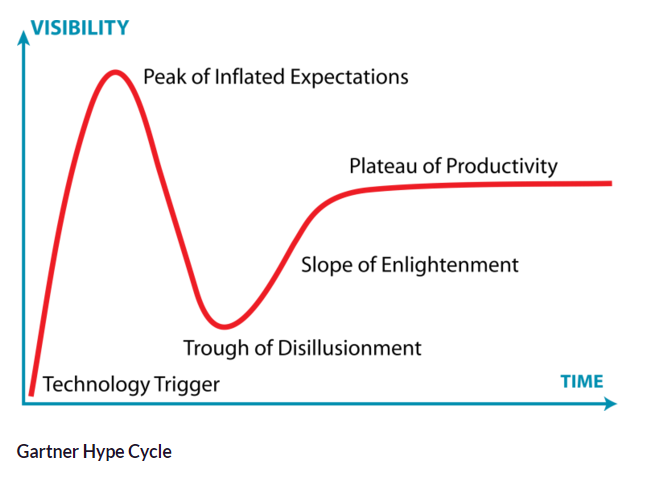 For the test we decided to choose a Client that considered calls to be the most important KPI for their business -- a courier company based in Ireland. We had previously applied click-to-call mobile ads to their account, so we knew that around 6% of their total monthly clicks were ‘call-clicks’. The website also tracks enquiries which generally convert at around 5%, but since around 80% of the Client’s business comes from phone calls, we were hoping we could grow the number of monthly call-clicks in the account, and therefore phone calls to the business.

For the purpose of the test we used the top three traffic-driving search campaigns in the account (we will call these the ‘original campaigns’). We created a call-only campaign for each of the three original campaigns, copied over all corresponding keywords and ad groups, set a -100% mobile bid adjustment on the original campaigns, and created new call-only ads that contained the company’s phone number in the headline.

In June, Google introduced Google Call Forwarding to Ireland, which when applied to AdWords campaigns enables advertisers to see detailed reports on phone call data, such as number of calls received or missed, the date and time of the call, the call duration, etc.

Applying this to the account was the next stage for our test, as previously we could only see the number of call-clicks for our campaigns, but we could not see actual phone call data.

Our results showed that while the call-only campaigns generated 233% more call-clicks in the account, only 6% of the users who clicked on a call-only ad actually went on to make a phone call! A conversion rate of 6% is considerably lower than the 100% conversion rate we had originally expected, so we wanted to know why so many users were clicking on the phone number but not following through with the call.

Our suspicion as to why the call-only campaigns had a lower conversion rate than we originally thought had to do with user intent – Perhaps a user searching for ‘courier dublin’ on their mobile had no intension to call a courier. Perhaps instead they wanted to look up courier rates on a website, for example.

This thought led us to the next stage of our test. We decided to limit the targeting of the call-only campaigns to keywords that showed only an intent to call, such as ‘courier dublin phone number’ or ‘contact courier in ireland’. All non-intent keywords were moved back into the original click-to-call campaigns, and the -100% bid adjustment was removed. This now meant that if a user searched for ‘courier dublin’ on their mobile, they would once again see a click-to-call ad with the choice to click through to the website.

We ran both the original click-to-call campaigns and the new call-only campaigns together for a period of two months (1st August – 30th September) in order to compare phone call data for­ both ad formats. We expected the conversion rate of the call-only ads to increase as we were now targeting call-intent keywords only within these campaigns.

While a conversion rate of 5% for the call-only campaigns is in line with the account conversion rate, overall conversion volume in the account actually decreased when they were implemented, as mobile users no longer had the option to enquire on the website, and therefore ROI was negatively impacted.

The above result shows that the low conversion rate of the call-only campaigns has nothing to do with user intent as we had originally suspected, but more to do with the ad format. It could be that users expect to click through to the website when they click on the headline of a call-only ad, but navigate away once they see the only option is to call the business.

Whatever the reason, call-only campaigns do not seem to convert clicks into calls nearly as well as click-to-call ads do, so we have paused these campaigns in the account for the time being. Have you seen similar results from your call-only campaigns, or seen results that are wildly different to ours? If so, we would love to hear about them in the comment section below.