Other Articles by Sophie 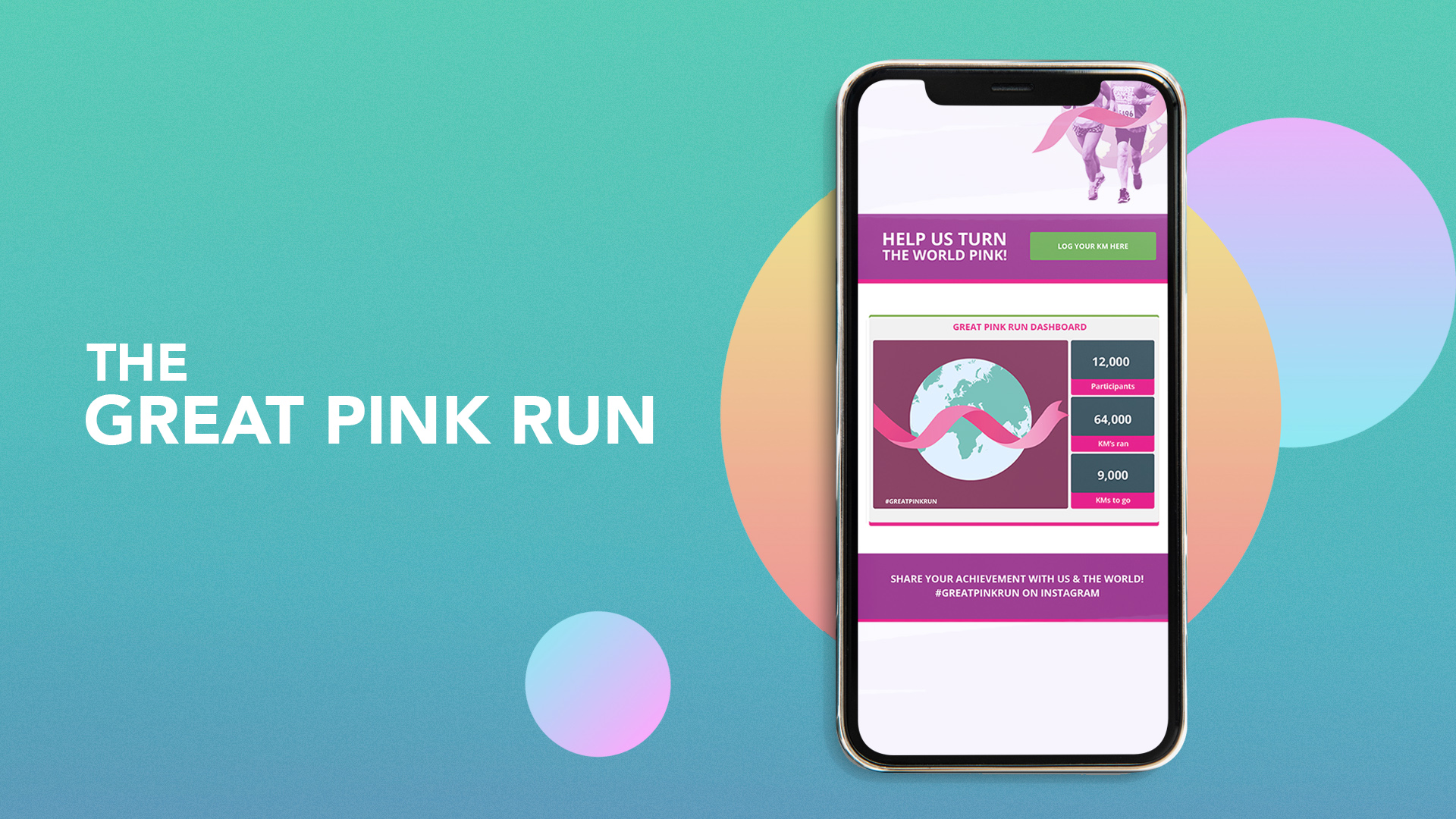 The Covid-19 Crisis has impacted many sectors, particularly charities who have seen a catastrophic collapse in earned and fundraised income resulting from the pandemic.

This year, most charity events have been cancelled & moved online. While we’ve watched companies adapt impressively well by transitioning to virtual events, there’s always the worry: will as many people sign up for a virtual event? Will it be as successful without the charged atmosphere of a crowded space? Will anyone talk about it on social?

Find out how we helped Breast Cancer Ireland have their biggest year yet by bringing the Great Pink Run online. 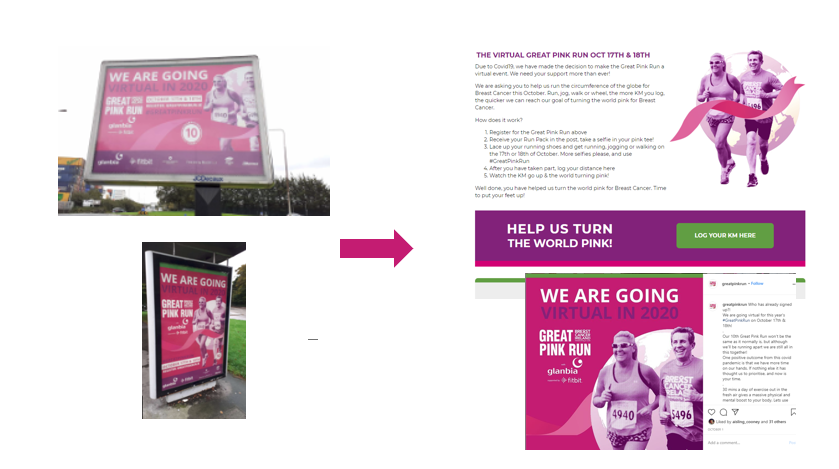 The Great Pink Run is Breast Cancer Ireland’s biggest fundraising event of the year. It has been running for 10 years across the Phoenix Park and Kilkenny Park, with a great atmosphere and sense of community.  Due to the pandemic, this year they had no option but to make it a virtual event. But would there be any momentum or excitement? Would people be motivated to take part without the fun that comes with an organised event?

With a strong creative concept and a digital first approach, we set to work on making this an event everyone would want to take part in. There were 4 key elements that ensured this campaign was a success from a digital point of view:

We came up with the creative concept which was ‘Run The World for Breast Cancer Ireland’. We set a collective goal of covering 40,070 kilometres before the end of the Great Pink Run weekend, which is the equivalent of running a full circumference of the world.

We decided that for our virtual run, participants could do their own race, anywhere they wanted, for as many kilometres as they liked.

On the Great Pink Run website, we then designed a globe and an online tracking device where they could log their distance once they’d completed their run. As they logged their kilometres, they could watch as the globe turned pink in front of their eyes! From this, our mission was born: Turn The Globe Pink for Breast Cancer Ireland!

The interactive element of our audience logging their kilometres on the website and seeing the globe turning pink ended up being a really effective way to create a buzz and get people talking about the event. 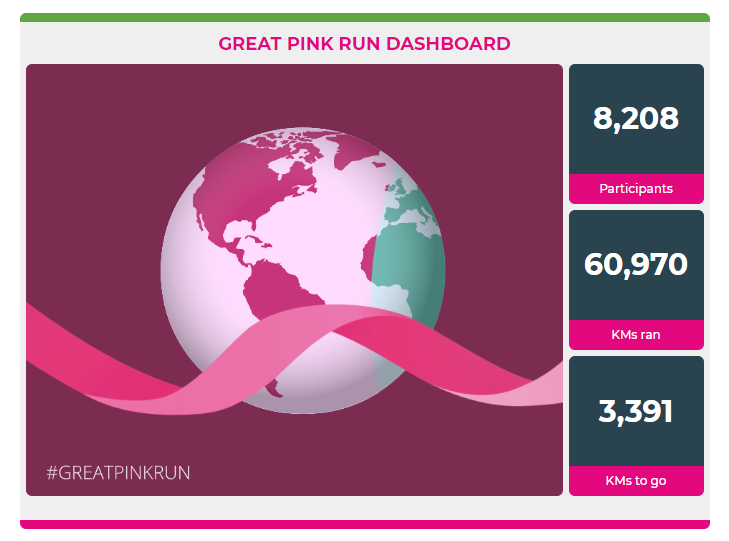 This creative was also consistent across online and offline channels throughout the campaign.

The use of influencers and ambassadors such as Georgie Crawford, James Patrice and Sonia O’Sullivan played a huge role in engaging our audience. We were able to create some excellent video pieces that could be shared across all channels and expand our reach. Georgie Crawford’s Instagram post received almost 3k likes, while James Patrice’s video garnered almost 30k video views. 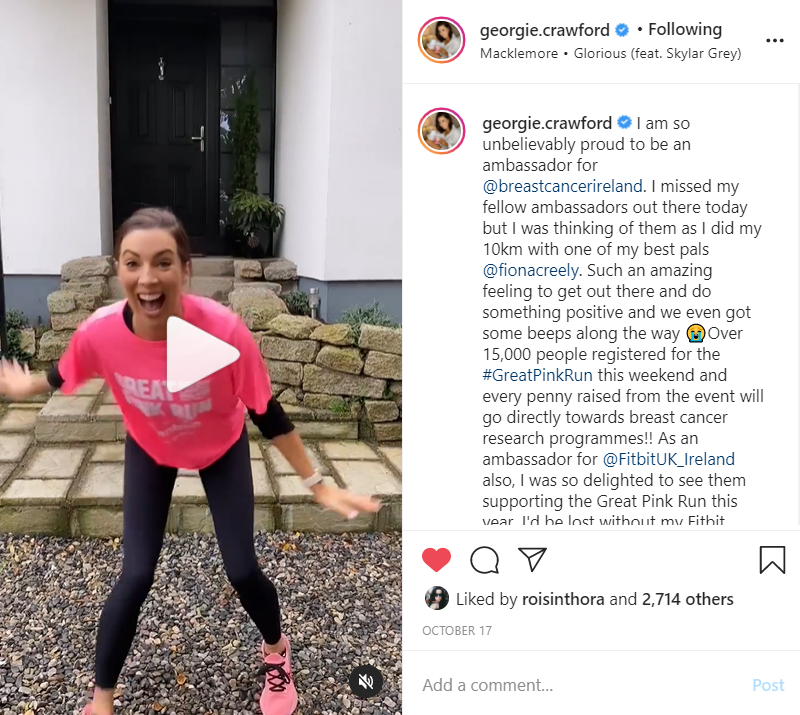 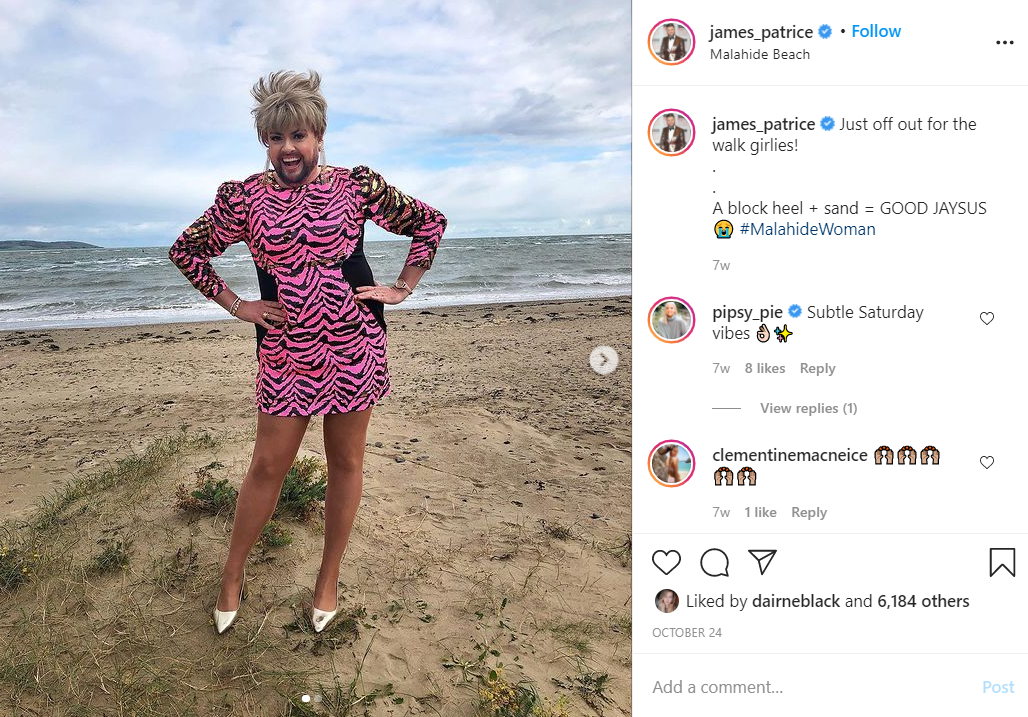 User Generated Content was vital this year more than ever to create a sense of community and togetherness for everyone taking part in the run. We encouraged all participants to share their photos and use the hashtag #GreatPinkRun on the day. These images would be automatically pulled on to the interactive content, so when you go to log your distance you would see everyone else who had taken part.  This was essential to generate a sense of community. It’s estimated that there were more than 30,000 interactions with the hashtag #GreatPinkRun across Facebook, Instagram and Twitter. 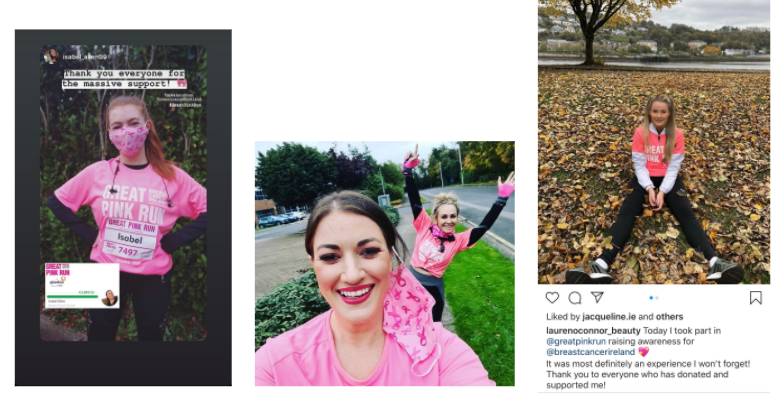 We utilised a full funnel strategy for this campaign, ensuring we drove awareness with great upper funnel content and implemented a strong remarketing campaign targeted to all engagers and website visitors.  Once someone had signed up to the Great Pink Run, we continued to target them, encouraging them to share pics when they received their run pack, or use the hashtag on the day, or share our running tips content.

This year was the most successful Great Pink Run that Breast Cancer Ireland have ever had.

- Distance ran: 65,000 km. Which means that yep- you guessed it -we ran MORE than a full circumference of the globe at 40,070km. We ran 1.4 times around the world, to be precise! Not only that, but considering 5,500 people logged their kilometres on our website out of a total 14,870 people who registered, we most likely ran even FURTHER than this!

User Generated Content is essential to generate that sense of community that we are at risk of losing when an event goes virtual. Through a strong UGC campaign, sharing of real stories and amplification through brand ambassadors you can ensure all participants feel like they are part of a community. The best marketing is that which comes from your own customers, if you can build your army of brand advocates through social media, you are on to a winner.