Other Articles by Kenia Gonzalez 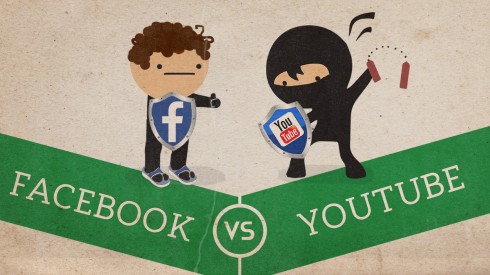 Online video has increased in terms of importance for digital marketers over the past few years.  According to Cisco, video will account for 69% of all consumer-based internet traffic by 2017.

The big question for brands is, if you want to deliver your video to right audience where will you promote it? For many of us the first place that comes to mind would be YouTube. This year marked the 10th anniversary of the first video being uploaded to YouTube. For those of you who are curious, it's called "Me at the zoo" and can be viewed below:

Facebook Video's success hasn’t been limited to just one viral video fad. In fact, views on this platform have continued to grow steadily. By January, Facebook was serving 3 billion video views per day. In April, Facebook reached 4 billion views per day. While this all sounds very impressive and looks to spell bad news for YouTube, these numbers do not take into account the differences in how YouTube and Facebook are counting their views. If we take a closer look, we soon realise that what YouTube call a video view and a what Facebook call a video view are not quite the same.

The first thing we have to consider is that on YouTube advertising a view is counted 30 seconds from when the viewer is engaged (or the full duration of the video if it's shorter than 30 seconds). Facebook, on the other hand, counts a view at the three second mark, which certainly makes their boasting of such high views open to scrutiny (especially when you take autoplay into account). We wanted to know how these differences between YouTube and Facebook's methods of view calculation could affect online video advertising so we conducted some research.

We advertised the same 20 second long video and targeted the same audience for the same period of time via YouTube ads and Facebook Video ads.  The only differences were the budgets, so we normalised the results for a common budget of €1,000.

Video views are a far more important metric than impressions so how did they fare? The view rate on Facebook was approximately double of what we saw on YouTube. Now, let’s compare the Cost Per View (CPV) on both platforms. With a CPV €0.04, YouTube is 751% more expensive than Facebook with a CPV of €0.005.  Yes, €0.005 - that's only half a cent per view! (for anyone who thought they saw a typo).

We used the same 20 second long video for the next step. In the table below, we can see that there were more people leaving before 25% of the video had played on Facebook. It is natural to expect more people to watch the first 5 seconds of the video on YouTube since they are basically forced to do so (You can skip this ad after 5…4…3…2…please, make it stop...). As time passes, it seems that Facebook users got more engaged with the video. One out of four people finished watching the full video on Facebook whereas approximately one in six people finished watching the full video on YouTube.

Have you any interesting online video insights to share with us?  Send us a tweet and we can nerd-bond over them!