Wolfgang Essentials 2017 Video: The Next Evolution of the Advertising Experience

Other Articles by Darrel Caulfield

It's easy to take what we can do with digital advertising for granted. Whether is the incredible targeting options or the ability to accurately report on how you're spending your money, digital marketing was an exciting step forward for advertisers. When digital marketing was a relatively new concept, the early adopters reaped the biggest rewards. The next evolution in advertising is here in the shape of video. We can do incredible things with video and one particularly exciting format is 360 video and virtual reality.

The Next Evolution of the Advertising Experience: Video

The Next Evolution of the Advertising Experience: Intro

Alan: All right, everybody. You're very welcome back from the coffee break. I hope you're feeling caffeinated and stimulated. Brilliant line-up now from here through to the end. You're going to get an awful lot from the second half. The first talk is a really exciting one. I'm dying to see this again on the big screen. So the creative team in Wolfgang has been getting really excited of late about all the new ad formats that are emerging and the opportunities within those. I'm not even going to try and explain what's coming next to you. I'm going to leave that in the capable hands of Darrel. Please welcome Darrel to the stage to talk about the next evolution in the advertising experience.

The Next Evolution of the Advertising Experience: Transcript

Thank you. I think the only thing more terrifying than talking in front of Al is knowing that his dad is back there, as well.

My name is Darrel. I'm part of the Creative Team here at Wolfgang, and as you can see, next to my massive head, the title of this talk is "The Next Evolution in the Advertising Experience." It's a really exciting title. I can't actually say that I came up with it myself.

But to be specific, and because I don't actually have enough time to be all mysterious, what I'm going to be talking to you about is 360 video and why it is actually a genuine evolution in advertising media. I don't have any fancy sports analogies or any bar graphs going up to the right. I usually only deal in colours and emotion, but we'll jump right into it.

I'm sure a lot of you have actually come across it by now. There are lots of companies getting behind it, but for those of you who haven't, it's footage that's captured in 360 degrees around the camera lens, so that it's not one specific point of view anymore. You actually get to see everything.

What does that mean for the user? Well, it means that they actually get to choose what they see, and that's really exciting. That's a lot of control for an advertiser to give up, and it ends up taking them from what used to be or traditionally was a directional shot, like what you would see on your television or your desktop computer. And it takes them into an immersive shot, so you're no longer watching space. You're in space, and that's the idea.

There is a lot of confusion over, "What is VR? What is 360 video?" And for the most part, they're actually kind of one and the same. Fundamentally speaking, they're made the same way. People usually just refer to virtual reality or VR when it's being watched in something like the Google Cardboard.

So why should we give a feck? Well, as content creators and as advertisers, this actually gives us a really unique opportunity to create something that's truly immersive. I could actually watch old people reacting to VR all day, but Al only gave me ten minutes. What's actually really interesting about the second lady is that she has a disease that makes her incredibly nearsighted, so this is the first time she's actually seeing her grandkids' faces. Wow.

But anyway, I digress.

When you look at mobile, this is really interesting, because this is the first time ever that the viewing experience is better on mobile devices than it was on a television or on a desktop. That's a huge shift. When you look back over advertising media, when you had ads on the paper, which was a visual media, you had ads on the radio. It was audio. And then, they combined the two, and they had TV.

But then, we had a whole load of nothing, absolutely nothing happening for decades. But then, we had the internet. Thanks, Google. I know you didn't invent it, but you know, you sure took it over.

Not until now, since we got this whole 360 video, VR thing, has there been a new layer added to the experience of actually watching something. So now, when you look back over the kind of evolutions in advertising media, what's really interesting is that the newspaper, the radio, the television. It was all about bringing the news to you. And now, the shift has changed. It's all about bringing you to the news story.

I'm going to give you a really cool example of that, something that the New York Times did in conjunction with Google, actually. Shameless plug again. So Snapchat Stories, Facebook Live or anything Facebook does, Instagram, Twitter ... they're all eating up more and more of traditional media's market share. And the New York Times was looking for a way to get a hold of that pesky millennial news reader, so they were looking at different technologies that existed, and they came across 360 video.

And they found that it was an amazing opportunity to put people into stories that just was not possible before. And they realised that it was giving up some power, but by giving the control to the viewer, it immersed them in a genuine experience.

What did they create? Well, they filmed a 360 video called "The Displaced" that immersed viewers in the lives of three refugee children, and what they ended up creating from that was an experience of the view being present. And it spoke to their sense of empathy. So to the millennials, it gave them all the feels. 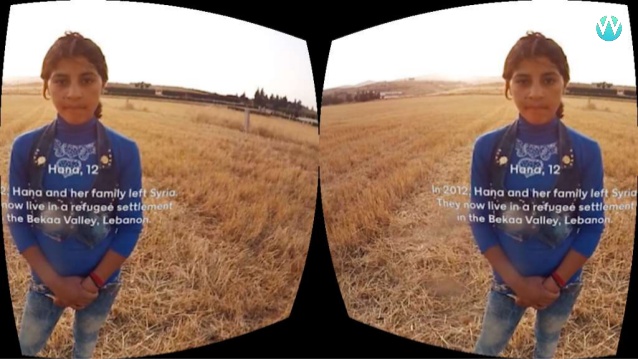 Wth that, this became the New York Times' most rapidly adopted app, which will have more than 500 thousand downloads in five months, and it resulted in 1.5 million views. Now, what's amazing about that views is that they were all, on average, about six minutes. So when you think about today's internet attention spans, that's a massive amount of time to hold somebody's attention. It went on to win the Mobile Grand Prix at the Cannes Lions, and what one of the judges had to say about it ... "It went beyond the initial wow factor to unlock levels of empathy and excitement that no other media could."

And that is what is key. This just couldn't be done before. You couldn't actually take somebody who was in their sitting room and put them in a new story.

So yeah, that's great. There are two giants, the New York Times and Google, doing this great thing. But what the hell have I done?

The OSi are a client of ours, and they tasked us last year with the opportunity to grow their blog readership by capturing additional audiences. And one of the audiences that we captured was parents looking for buggy-suitable walks. So we looked up some of the most popular walks that were across the country, and we created a piece of content that had maps and that had detailed directions so that they could stay on buggy-suitable surfaces.

What that ended up doing with us was that it fed our desire to show people exactly what they could experience before they actually go out on these journeys, or they go out and they do these things. So we looked at some of the most popular content that the OSi had, and we looked at their most walks, their most popular walks in Wicklow and Dublin, and we looked for another one of the audiences. That was ramblers and leisure walkers.

We then went to each of the four summits that we wanted to promote in the article, and we filmed in 360 degrees so that we could help them make the choice to go out on this walk on any given weekend. Now, this again, this is something that you just could not do before that.

There's no point in me standing up here talking to you about it when I can actually show you. I think everyone got one of those Tiger headsets. They're not as good as the Google ones, but for the sake of this, you don't have to use them if you don't want to. If you open up YouTube, your YouTube app, and search for OSi 360 Hellfire Club, you'll be able to look around in 360 degrees. I should probably do this as well.

If you look around, what we added to the actual 360 footage itself was annotated famous landmarks that are around the summit to show them exactly what they could expect when they went out.

You can keep those headsets and bring them home and maybe have a watch of the displays later on, so come on back into the Foundry.

With that OSI video, that was a really unique opportunity for us to create something that was immersive. But it's really important ... and this is something that is important to you guys. It should never be created just for the sake of it. You should always know what you want your viewer to do, feel after they view the content.

You know, this technology is obviously garnering a lot of interest. People are kind of jumping on it with Facebook and Google, and with all the studies that are happening to find out how people engage and how they react to it, they've actually found that watching VR or 360 video can actually create false memories.

Now, if you're talking about immersion or an experience, that's a pretty amazing thing. But if you're talking about advertising, that's a lot of power to put in your hands. So there is room there for some pretty risky things, but I'm not here to talk to you about business ethics. However, if you go home to the Mrs. or the fellow later on after a few pints in you tell them that you were in the Hellfire Club, then you know this as legit.

The Next Evolution of the Advertising Experience: Outro

Alan: Amazing stuff. I have to apologize to you all. When Darrel said, "We need to get cardboard headsets for everybody," I said, "That's fine. Just buy 400 of the cheapest ones you can possibly find." So your experience ... normally, when people experience this, it's on a heavy duty headset. So apologies if anybody had a little bit of double vision there.

We've got all this kit back in the office, and we've been playing with it. And we've got that ... what's it called? Google ... the painting thing?

Alan: Tilt, Tilt Brush, and it's amazing. You can draw pictures in the air. It's lots of fun at lunchtime. You'll just hear shrieks of laughter, and you'll go into the room, and there are people with the headset on, like, walking off bridges and falling into the water. And I did, and after I took it off, my legs were trembling. As I walked back to my seat, my body had thought I'd fallen from a great height. It's unbelievable stuff

The Next Evolution of the Advertising Experience: Slides