The SEO Down Low Episode 1

Other Articles by Kevin Moore 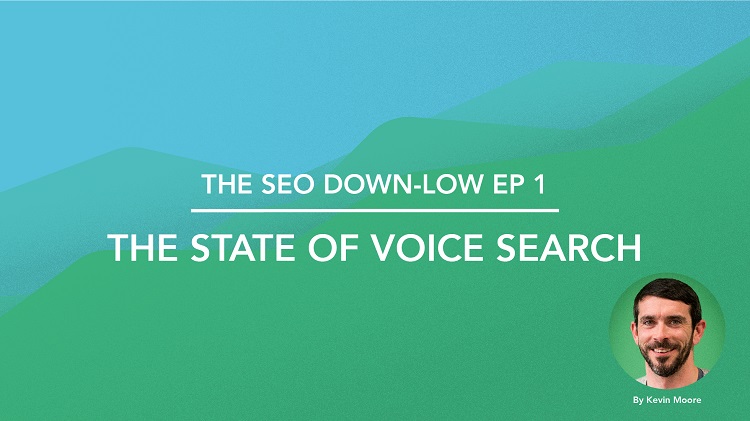 Welcome to the very first edition of the Wolfgang Digital, ‘SEO Down-Low’! As Search Engine Optimisation specialists, we spend up to 40 hours a week knee-deep in Search Engine Results Pages (SERPs) analysing every minute change and alteration Google makes. You mightn’t notice the ever-evolving SERPs as you browse for your next purchase or nugget of information. But when you are an SEO it is essential that you understand and stay ahead of the curve when it comes to the SERPs – we like to call these our, ‘home away from home’, because we spend so much time here.

Do you know how many times a year Google updates their ranking algorithm? The answer is, nobody knows but we reckon it’s somewhere between 500 to 600 updates per year. This means that there could be anything from an individual update to multiple updates per day. Our friends over at Moz have an excellent Google Ranking Algorithm update resource on their site, which they update frequently.

Besides constantly updating their ranking algorithm, something which directly affects online businesses from e-commerce websites to informational and lead generation websites, Google also spends a vast amount of time testing.

You’ll often spot new features or slight changes to both paid results, ads at the top of the SERPs, and organic results, results which feature slightly lower down the page. These tests can be as simple as changing the text or colours which appear in ads or organic results, and while these changes can appear harmless, they can often cause drastic results for your business if you are unaware.

That’s why we, the SEO team at Wolfgang, have decided to filter through the month’s SEO related news and summarise the most significant updates, so you’re always up to speed with Google and all things SEO. Anything we mention on the Down-Low will be of significance to any online business, either now or into the future – and we promise we won’t just talk about SERPs.

So, pop the kettle on, sit back and get yourself up to speed with the latest updates from the world of SEO from January 2017.

Here we are, one month down in 2017, and what a crazy month it has been in the wonderful world of Google and SEO. In the first ever edition of the, ‘SEO Down-Low’, we’ll dip our toes into exciting updates on, ‘Voice Search’, ‘Google My Business’, ‘Penguin 4.0 & SEO?’ and, ‘AMP Implementation’. 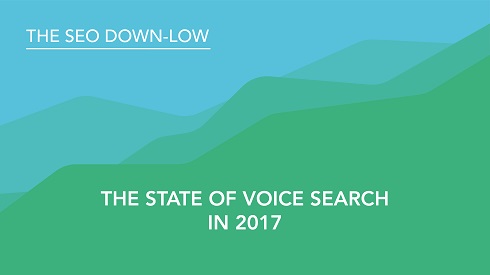 I don’t know if you are aware, but voice search began way back in 2002, before any of my three children were born, it’s by no means a new phenomenon and like my children it’s still learning and improving on a daily basis.

The struggle with voice search has been the algorithm’s inability to understand a variety of elements including accurately detecting spoken syllables, as well as generating results in an intuitive way and, of course, encourage mass user adoption.

With Google announcing back in March 2016 that 20% of searches were conducted through voice search, this stat blew me away and is surely an indication of where voice search is heading, and why savvy SEOs need to start incorporating voice search in their SEO strategy.

Check out the evolution of computing over the past two centuries, and pay particular attention to the last five changes, with the final two being voice related. 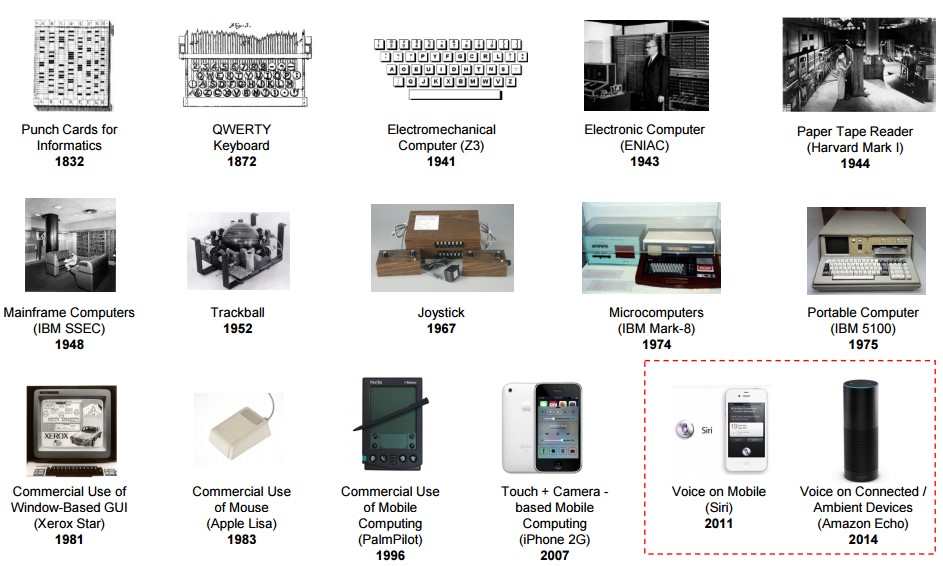 As with any change in technology, you get the innovators and early adopters before the general masses jump on board. With Google reporting that they now have 99% accuracy for voice recognition we believe this is a complete game changer. The below graph shows the most recent statistics on voice search in the US. 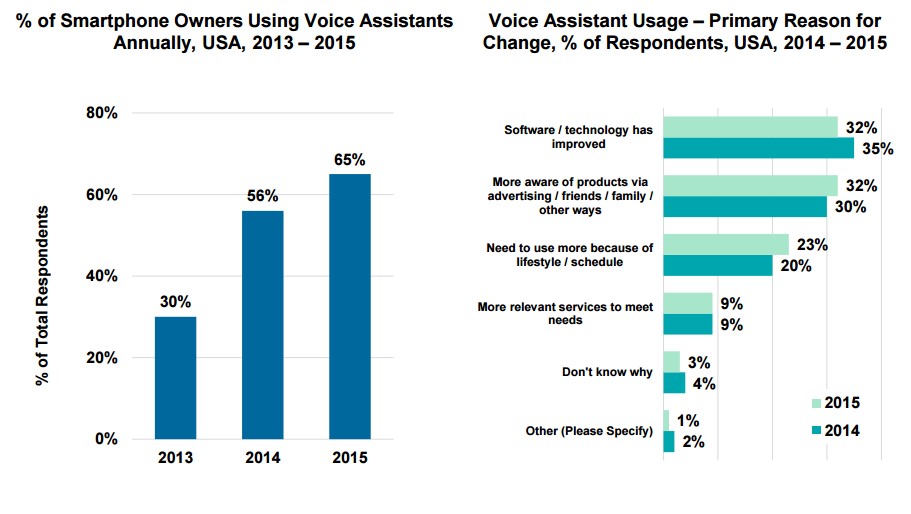 This is where we are at now, Google Home and Amazon Alexa were both reported in Forbes to have sold record amounts of units this Christmas in the US. With one estimate stating that the number of voice-powered homes are at 8.2 million as of January 2017.

All this now points to a changing approach or a new feature of SEO we like to call ‘Voice Search Optimisation (VSO)’. At this early stage, simply sitting back and waiting is not an option, first mover advantage is key in 2017. We will give you a few tips to help you on the way to optimising your website for voice search.

1. Think how you would do a voice search

Simply imagine how you would use a voice search to find your website, product or service. Then optimise for that terminology. Gone are the days of optimising for single keywords and machines, search engine algorithms are evolving rapidly and catching up on us, we don’t search like this anymore! Use longer word sequences when optimising your page’s meta-data.

Like the previous tip, we humans are adapting how we search in Google, we are more likely these days to ask a question. I certainly include query words at the start of my searches rather than just slapping two words in the search box! There has been numerous studies that show the changing face of search over the past couple of years. For example this research from Crazy Egg shows how users are asking questions and which ones are more prevalent.

Semantics are a search engine’s ability to understand a user’s intent, along with the contextual meaning of terms as they search. But Latent Semantic Indexing (LSI) is a mathematical method used by the search engines to determine the relationship between terms and concepts in content.  Check out a more in-depth explanation here.

It was in 2013 that Google released their ‘Hummingbird’ algorithm update, which is solely focused on understanding the intent behind search terms. Rather than writing keyword-rich content, you should put users first by creating content that’s inherently valuable and addressing any questions or concerns your audience may have. There are some handy tools that you can use to help you research when optimising your existing pages for semantic search such as: LSI Graph and Answer the Public.

One of the greatest things you can do towards your Voice Search Optimisation is get on board the schema train! Despite the algorithm becoming more sophisticated on a daily basis, they still love when webmasters make their life easier. Check out the blog I wrote last year which has links to tools and explanations on everything you need to know on structured data.

If you want more information on how you can incorporate VSO into your SEO strategy contact the SEO team at Wolfgang Digital today. 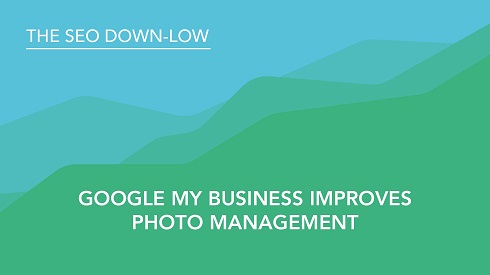 At Wolfgang we always recommend businesses to embrace Google tools such as Google Analytics and Google Search Console along with products such as Google My Business (GMB). The reason we recommend GMB is because it’s part of the Knowledge Graph.  Google presents your GMB page and other info such as opening hours, address, reviews and social media channels on the right rail of the SERPs whenever a brand search is carried out.

Making use of this free and valuable real estate is a must in 2017, building brand awareness, establishing trust and giving valuable information to potential customers searching for your business on the fly. 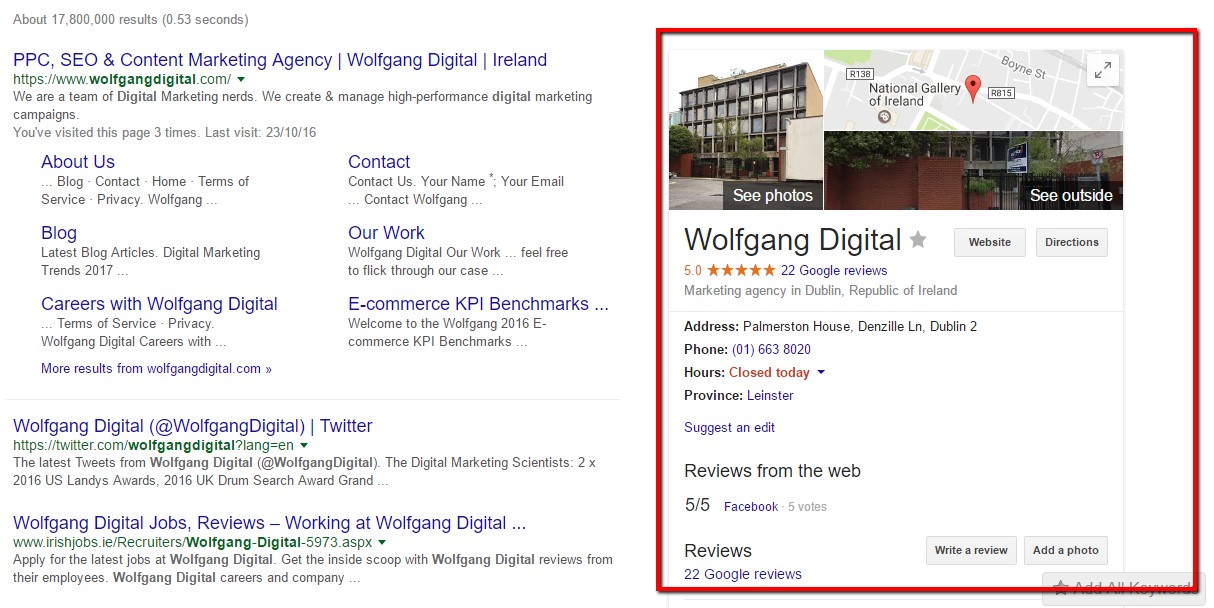 Only last week, reports have been coming out that Google have rolled out a new photo interface and functionality in the dashboard. Giving business owners greater usability and flexibility when it comes to uploading and organising images for their business account.

These photos are also used in the Google Maps listing, enhancing the experience and dominance of your business’ bricks and mortar presence.

Mike Blumenthal has discovered during a recent case study that 70% of web based actions leading to a sale occurred on Google, either in the Knowledge Panel, Maps or the search result. Also, Google research has indicated significant click through improvements on listings with photos vs those without.

Here is a couple of images from the new interface, we have not seen it rolled out in Ireland yet, but it will most likely be hitting our shores soon. 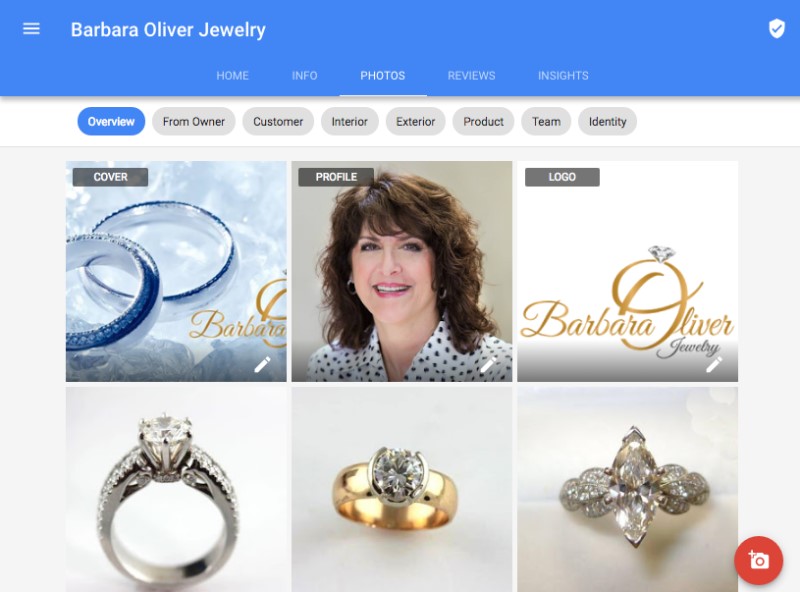 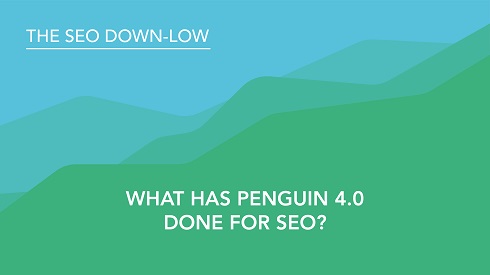 What Has Penguin 4.0 Done for SEO?

Back in September 2016, Penguin 4.0 was released and the White Hat SEO world released a very large sigh of relief, while Black Hats slipped away deeper into the dark abyss. Website owners who hired these black hatters had to hold their breath and see what was to come of the big bad Penguin.

One of SEO’s leading gurus Eric Enge created a great video last week on the background, lead up and impact of Google’s most significant algorithm in recent years. What he uncovered is that this update is a kinder and gentler than previously expected by the SEO community.

Firstly, the old Penguin algorithms looked at websites holistically and if there were bad link practices at play the whole website would be penalised. The websites wouldn’t be able to get out of, ‘Penguin Jail’, until the next Google update, which could be months or even years away. The new Penguin, however, looks at links individually as the search bots meet them while crawling the web.

Secondly, these links are simply devalued rather than penalised, therefore reducing any link value that would have been attributed to the specific page, and not the website as a whole being penalised.

Real time, in the context of Penguin, actually means that bots crawl the website or find the links and deem them to be bad. It is during this real time that they devalue links.

Our final recommendation on Penguin 4.0 is to continue to acquire good, healthy and relevant links to your site and periodically engage in, ’backlink detoxification’. This process involves using specific tools to identify the link value of your existing backlink profile and where necessary disavow negative links through Google Search Console. 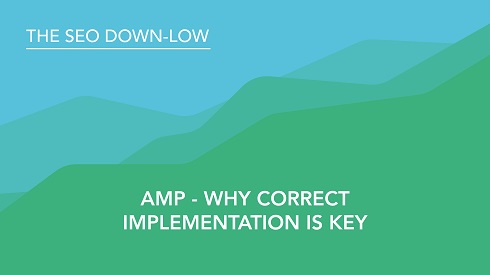 AMP – Why Correct Implementation is Key

Let’s cut to the chase, when browsing on our mobiles, be it in our Social Media channels or the, ’Big G’, nothing entices us more than that slick little lightning strike symbol, indicating a page is an Accelerated Mobile Page (AMP).

So is AMP a ranking factor in Google? Just this week Google engineer John Mueller dismissed this theory, stating on Twitter that, “AMP isn't a ranking factor”. Despite Google saying this on many occasions, people want to believe that anything they invest money in online must have some organic return.

However, like I pointed out earlier, AMP entices Click Through Rates (CTR) which is a ranking factor. Pages which load at the speed we have come to expect make the user experience better, so yes, in a roundabout way correctly implementing AMP pages on your site will reap some ranking benefits. 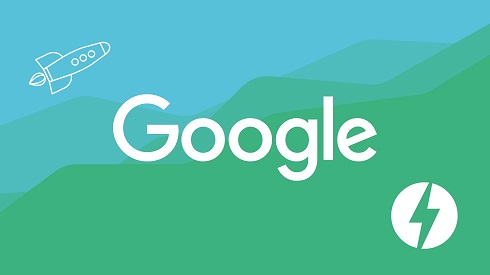 Back in August 2016, Moz reported that Google were going to be rolling out AMP pages in desktop results, creating a wave of websites to embrace and implement AMP pages. But in September of last year Search Engine Land released information that AMP was causing a bug in the results – if you tried to click on the result, it wouldn’t work. 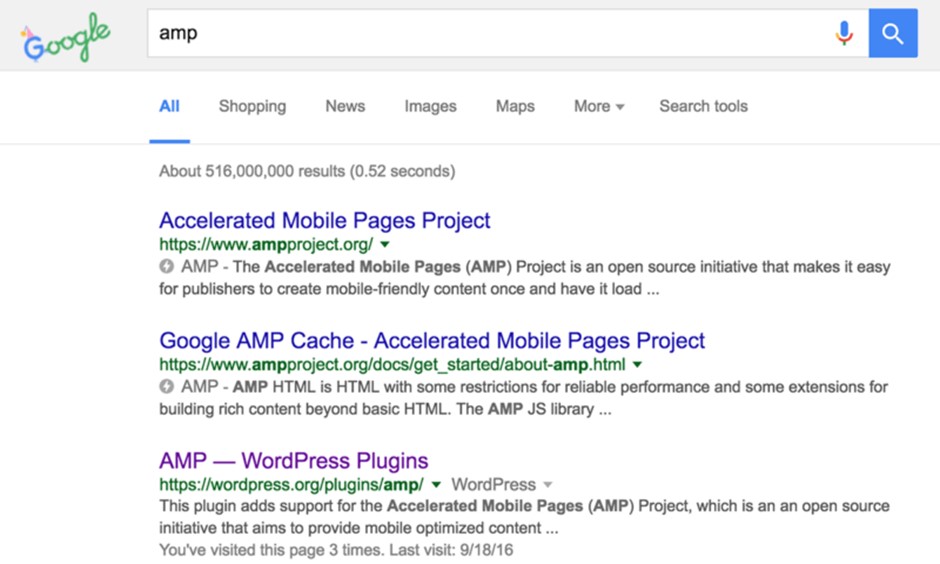 Back to January 2017, in a Google Webmaster Central hangout with the esteemed John Mueller, Glenn Gabe posed the question, “Are AMP pages used in calculating the site quality and Panda? Are they treated like normal pages from a site quality point?” The answer was very clear and great to hear:

“If it's a canonical URL for search, if it's the one that we actually index, then yes we will use that when determining the quality of the site when looking at things overall”.

This means only one thing for us SEOs, and that is to ensure that when we are involved in any implementation of AMP pages on a website, we make sure they are the canonical version of the page presented to Google, which they will judge.

Thanks for reading and be sure to check into the Wolfgang Blog next month for ‘February’s SEO Down-Low’!