Amazon’s Big Secret: And Your Next Opportunity

Other Articles by Brendan Almack 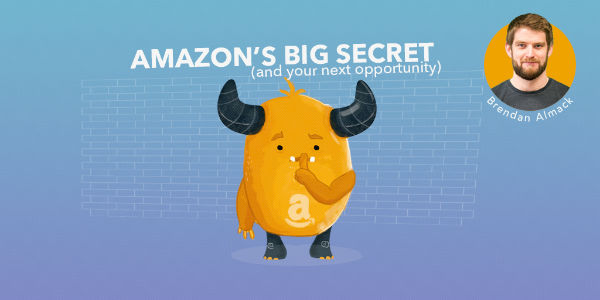 I'm fresh off the heels of Wolfgang Essentials where I let everyone in on Amazon's Big Secret. Since then, I've been thinking about it and I figured if I told the 360 people in Google's Foundry, I may as well let you in on it too.

I kicked off that talk with two questions.

One or two hands went up for the first question, but the entire room jumped into action for the second. Thank Christ. I was about to spend twenty minutes discussing the potential of Amazon as an advertising platform and in that moment the potential I believed existed was confirmed. But just how much potential does Amazon have?

Never Take Your Eyes Off Amazon

Over the past few years, Amazon has been referred to as an 'e-commerce behemoth' but regardless of your vertical, if you're no competing with Amazon right now, you will be in the next couple of years. The digital landscape is changing and changing fast. Five years ago, you could have asked Tesco who their biggest rivals were and Amazon wouldn't have got a mention. That was until Amazon went and bought Whole Foods and suddenly they have their finger in the grocery pie.

Earlier this year, Amazon - the company you'd associate more with buying blenders than anything else, - increased their investment in the insurance game. If you take one thing away from this article, it's "don't take your eyes off Amazon".

For many obvious reasons, I'm a big fan of Google. I didn't fall in love with advertising and then find Google. I fell in love with advertising because I found Google AdWords and today I still believe that AdWords is the best method for achieving direct response marketing goals. AdWords delivered incredible figures and returns for our clients over many years, despite being, or perhaps because it was, the only game in town.

A few years later, Facebook came along and after many years of honing their advertising products, Zuckerberg's brainchild was able to offer advertisers a measurable and effective conversion point through the likes of Dynamic Product Ads.

This was brilliant. A massive advertising duopoly had been created, arguably the biggest duopoly in business. On the surface, many saw these as competing products, but if you're a marketer you'll know these are complimentary. You'll be able to see some examples of how we integrated Google and Facebook to deliver whopper results in recent years when we release more Wolfgang Essentials videos over on our YouTube Channel in the coming weeks.

Now we're looking for the next big integration opportunity for businesses.

We believe that opportunity is Amazon.

Jeff Bezos Sells Whatever The Fuck He Wants

There are a few things you need to know about Jeff Bezos. He started out selling books back in 1993 and just five years later, Amazon expanded towards selling other goods too. I have one tip for you; "never bet against Bezos". In terms of Amazon's share price, if I gave Jeff a grand two years ago, he'd give me back five grand today. That's just one stat to indicate the explosive growth of Amazon. As a marketer, I'm left wondering if Amazon can challenge for ad spend and muscle their way into the Google/Facebook duopoly.

Well, first of all, just look at Jeff. 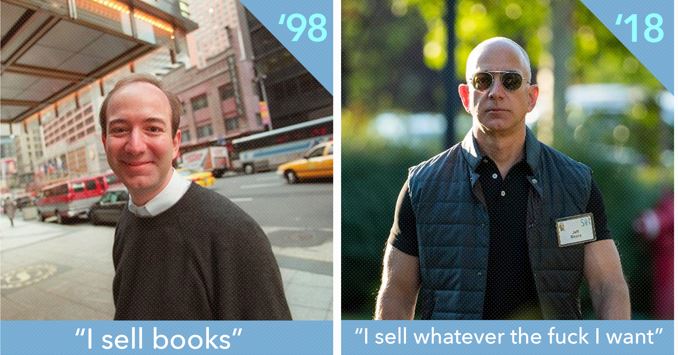 He could muscle his way into anything. In fact, there's a direct correlation between Amazon's success and Jeff's buffness - but I digress.

To challenge for ad spend, Jeff will lead Amazon to battle to conquer part of the three S's: Search Social and Shop. 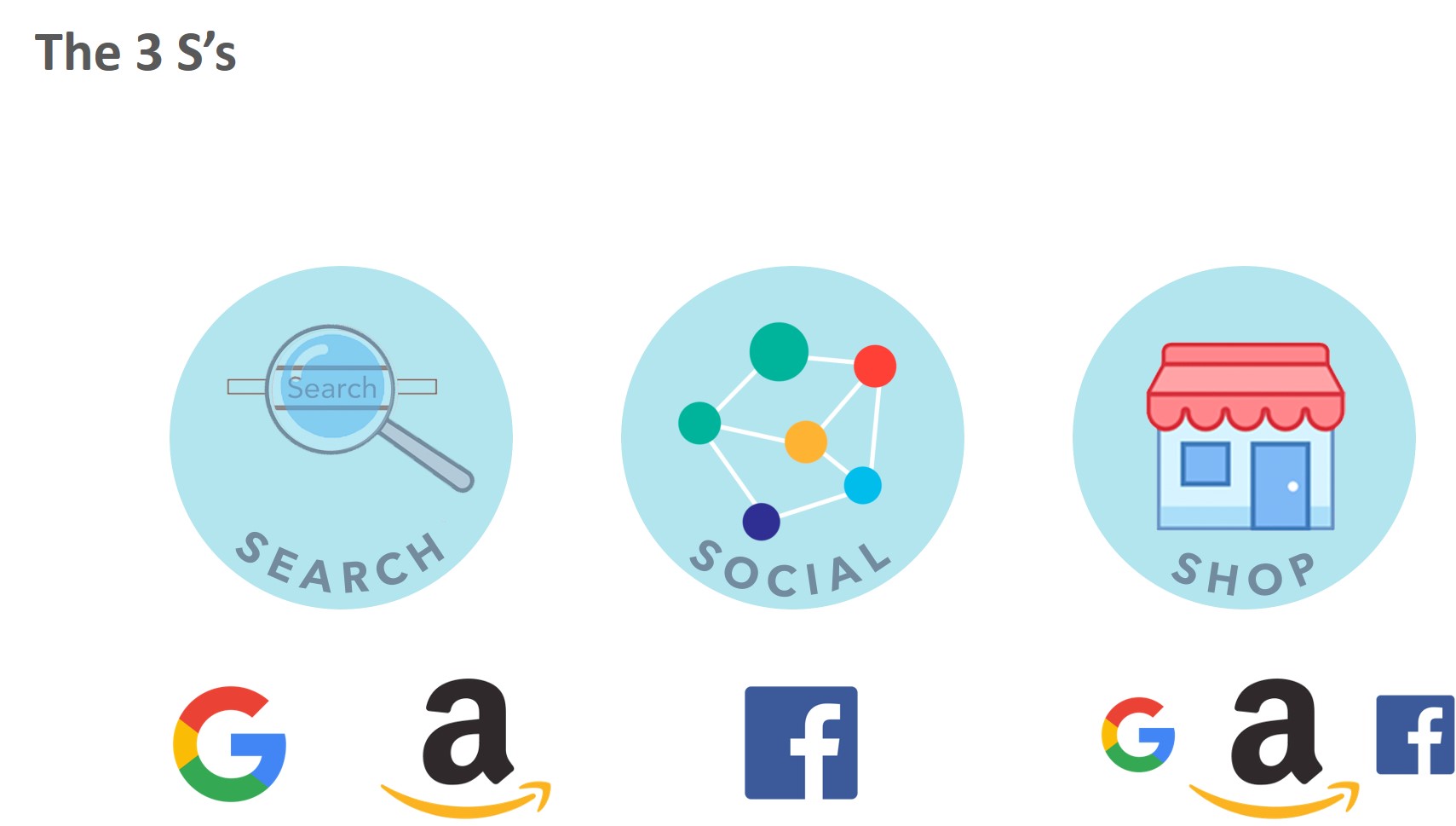 These three activities keep the world wide web running and if you conquer all three, you win. Conquer two and you get to compete at the very top:

It seems pretty clear-cut, but then I found a stat that blew me away; 49% of product searches start on Amazon. People are bypassing Google and going straight to Amazon creating a tipping point. Jeff saw this tipping point and as a result, Amazon cancelled their Google Shopping Ads worth in the region of $50 million. This is a really big deal because Amazon has traditionally been Google's biggest customer. It's also massive because it means Jeff is "Amazon doesn't need Google's traffic".

While Amazon's power is certainly on the rise,  I don't believe the battle for your ad spend is a zero-sum game. I can't see Amazon cannibalising Google spend at all. Instead, I believe Amazon has incrementally added to the search ecosystem. They won't go after Google or Facebook spends but instead Amazon will take on traditional above the line spend.

This is really exciting because just like Facebook complimented our work with Google, I can see Amazon complimenting our activity on both platforms.

Now, I promised you a secret reveal and it would be rude if I didn't follow through on that. Here it is. Amazon is already making wads of cash from digital advertising. It's hard to find, but if your life has lost all meaning and you do dig into their quarterly reports you'll find something they describe as "other" which is bringing in over 2 billion dollars. At the footer of the report, other is described as being primarily digital advertising.

I can hear your jaw hitting the table there. Yes indeed. Amazon made two billion dollars in the first three months of 2018 from digital advertising. Here's some context: 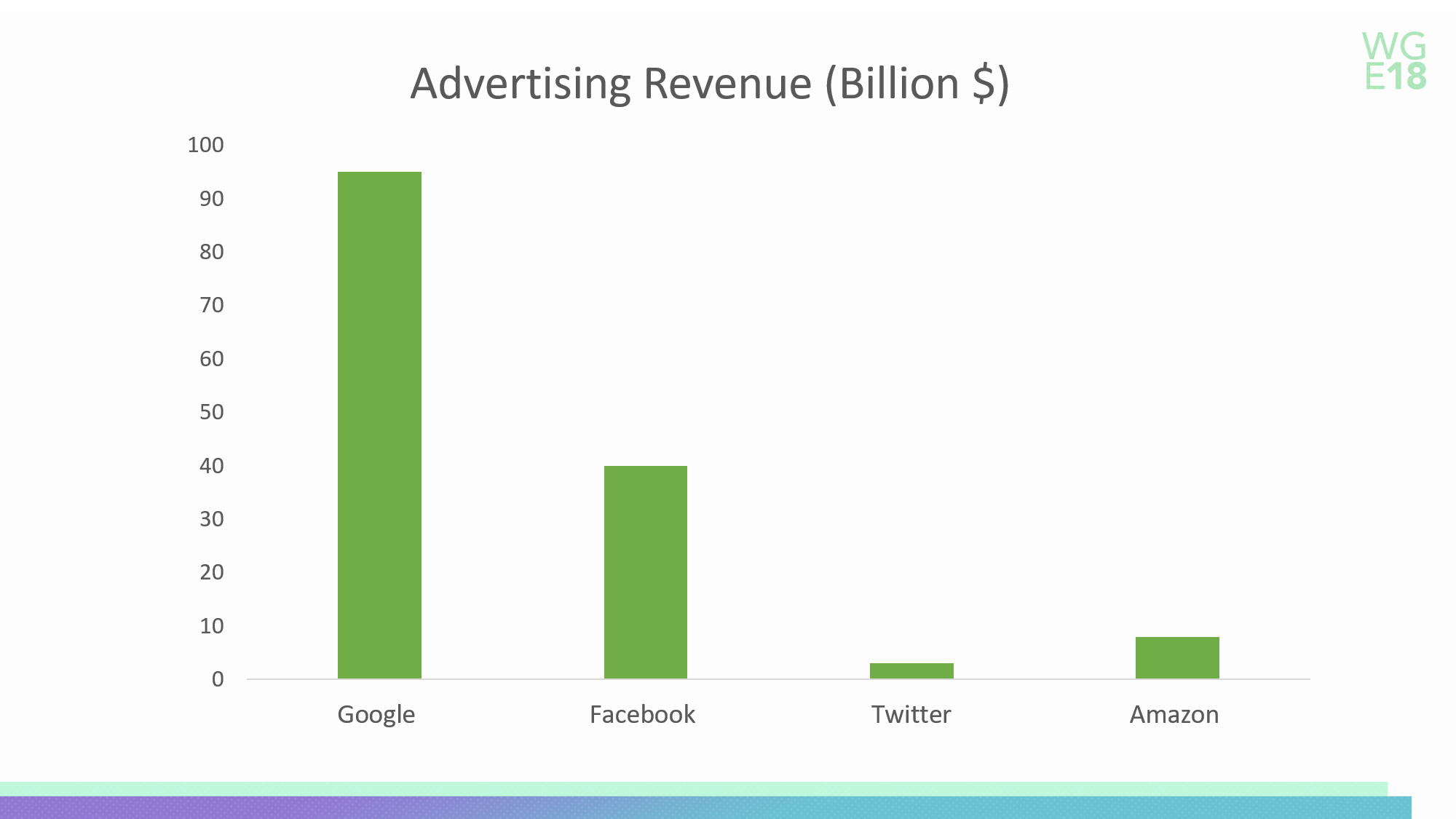 They're already ahead of Twitter! Amazon has become the third digital marketing platform without most of us even knowing it. But how have they done it? Simply put, Amazon is the next evolution of search advertising.

We love Google. Through Google Search, people whack in a keyword, we spot their intent and then serve them an ad. With Amazon, it's the same except the customer has already walked into the shop and started looking. Amazon's obsession with conversion is also visible in their ads, as they're careful to be almost indistinguishable from regular search results. Also, all the related products and recommended upsells are promoted Amazon ads too. All powered by familiar digital marketing elements, including CPC, product feed integration and programmatic.

Amazon will also be taking a leaf from Facebook's, well, book and have already started developing their own pixel. This will be the key to integrating Google, Facebook and Amazon into an integrated online shopping experience.

I'm going to let Jeff Bezos close up this article. He said that when new trends emerge, businesses have a choice. They can either embrace them so you have a tailwind, or fight them even though you're probably fighting the future. As digital marketers, it would appear to be an easy choice as we love nothing more than passing on the benefits from a first-mover advantage to our companies or clients.

Of course, you could fight and resist Amazon and Jeff Bezos but just remember you'll need a big fuckin' robot because Jeff has loads of them. 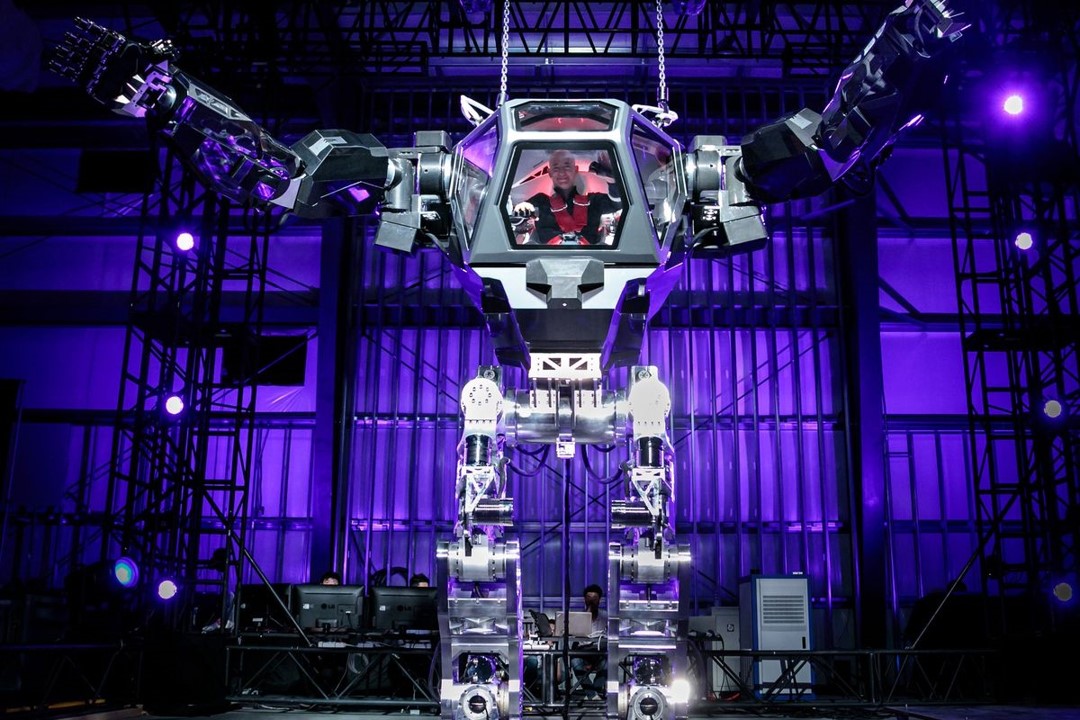