Battle Of The Internet Giants: The Greatest Innovation Since Google Shopping

In this month's 'Battle of the Internet Giants', I'm taking a closer look what's driving changing user behaviour around Facebook as a channel and can hardly contain my excitement as Google launches its biggest retail innovation since Google Shopping! 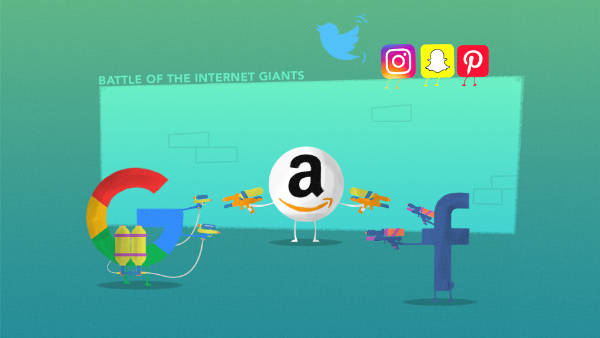 Facebook admitted it is struggling to keep up with rapidly changing user behaviour, particularly in monetising Messaging, Stories and Videos. These issues are now costing them senior staff. Earlier this year WhatsApp co-founder Brian Acton left Facebook citing concerns over how Facebook was planning to monetise the messaging platform. More recently both Instagram's founders quit their roles in the Facebook family, it's rumoured that independence and the commercialisation of Instagram were their chief concerns.

Speaking of staff walking out; Google hit the global headlines this month when staff walked out to demonstrate their concerns over the treatment of women in the workplace. Forced arbitration and Googles' handling of sexual misconduct allegations were among the issues.

These negative stories are not isolated. Sentiment has swung dramatically against the digital media duopoly this year. But the big question is this: Is this bad press impacting user behaviour and the digital media giants' revenues?

Let’s dive into their Q3 financial reports to find out.

Facebook user growth has stalled in the US and has shrunk in Europe. Is this due to sentiment or is it something else? If users were rallying against the social media giant, Twitter & Snapchat would be bathing in increased users. However, according to their Q3 reports, Twitter lost 9 million daily active users and Snapchat lost 2 million during the quarter.

So where are these users migrating to?

Instagram of course! Another member of Zuckerberg’s Facebook family and the fastest growing social media platform in the world. This indicates that sentiment against Facebook isn't the cause of their user growth issue. I'd suggest it's far more likely to be Facebook fatigue. After about a decade of gazing into the blue and white feed daily, Facebook users are simply bored and seeking new spaces for their social activity. We can conclude that bad press isn't what's damaging Facebook's user growth, as Instagram is hoovering up new users.

So user behaviour isn't impacted by the ongoing bad press. What about advertiser spend?

Despite the cacophony of bad press and negative online sentiment, Google and Facebook have reported YoY revenues are up 22% and 33% respectively during this time. The monopolistic position that the duopoly enjoys means even if advertisers are outraged by the companies' loose morals, they aren't about to go back to 2008 and spend a pile of cash on press.

Whatever your position on ethics, when it comes to performance one thing is clear: savvy digital marketers now need to become Instagram super-users. Good news on that front: This month Instagram launches its Instagram Analytics platform, giving marketers deeper data on performance. Having recently uncovered the value of a Facebook engagement (watch below) we are desperate to dive in and see how Instagram engagements stack up against Facebook engagements for conversion.

Another important piece of Insta-news for digital marketers revealed by Zuckerberg is that “users will soon share more to their Stories than in their Feed.” Impressions are sure to follow, so it’s crucial that marketers are thinking about how to engage with users' increasing appetites for Stories. To help with this, Instagram has just released a new feature which allows brands to advertise Shoppable Stories to target Instagram users.

YouTube have also just improved a similar conversion focused video innovation: The 'TrueView for Action' format, which allows the video viewer convert directly from the video. I can see this being very useful for micro conversions such as newsletter sign-ups. To generate sales, TrueView for Action would need to be deployed further down the funnel as a remarketing tactic. Ain't nobody going from first video view to sale without a little foreplay to further their interest.

The biggest retail innovation since Google Shopping is now in beta for a select number of multi-channel retailers in Europe. Store Sales Direct allows marketers to see how many of their in-store conversions were touched by online. Wolfgang has the privilege of managing two of the beta companies and so far results are fascinating. Typically for every €1 in online revenue, we are seeing a further €2 in-store which was influenced by online. Meaning we can now demonstrate that retailers are receiving 3 times more return on ad spend than we were previously reporting! We've already seen marketers move large tranches of budget from press to online based on this report. Get ready retailers, the Store Sales Direct Report will shift your media worldview.