What if SEO Metrics Could Win the Premier League?

With the return of the Premier League just around the corner, football fans the world over are getting ready for the big kick off, with every metric, statistic and omen being meticulously scrutinised in an effort to try and figure out who the big winners and losers will be.

While plenty of ‘moneyball’ style studies have been conducted which link yearly club revenue, net transfer spending and the overall richness of a club with their performance on the field, as digital marketers, we’ve taken a very different view. This season, we’re every bit as interested in how the Premier League’s clubs are faring in terms of digital metrics. 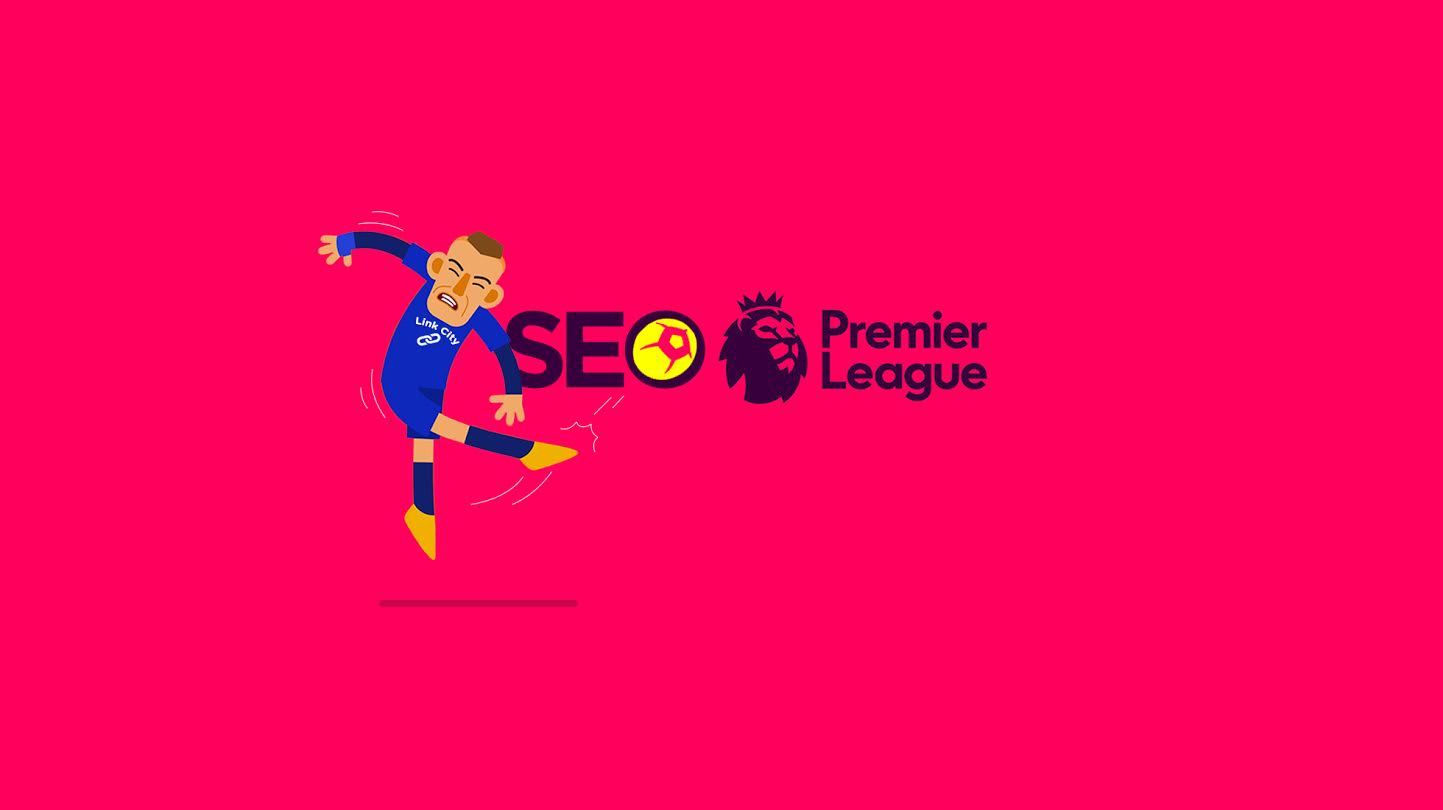 Here at the Wolfgang Digital SEO department, we wanted to see how Premier League clubs performed in terms of key SEO metrics and ranked them accordingly in a special table not too unlike that which ranks them in terms of their football results.

The main grading metric that we use, which we call ‘SEO Points’, is our table’s version of the classic ‘three for a win, one for a draw’ Premier League points. Made from the average of a club’s website’s domain authority and home page authority, often considered the two main signals of a website’s strength in terms of SEO by digital marketers, SEO Points allow us to rank the Premier League clubs in an order which actually appears like a fairly plausible finishing order for the coming season (albeit with one rather notable exception which we will talk about later).

When two teams find themselves level in terms of SEO Points, our SEO Premier League table has a tiebreaker system in place which is somewhat similar to what the actual Premier League uses. While real football leagues typically use a system which compares goals scored for and against, ours looks at the teams’ websites’ backlink profiles. Using one of SEO Website Checker’s tools, we were able to determine the percentage of valuable quality links in each club’s backlink profile, essentially a way of rewarding clubs for looking after their backlink profiles and not being too spammy. This came in quite handy, as there are a few cases where more than one team has the same number of SEO Points. 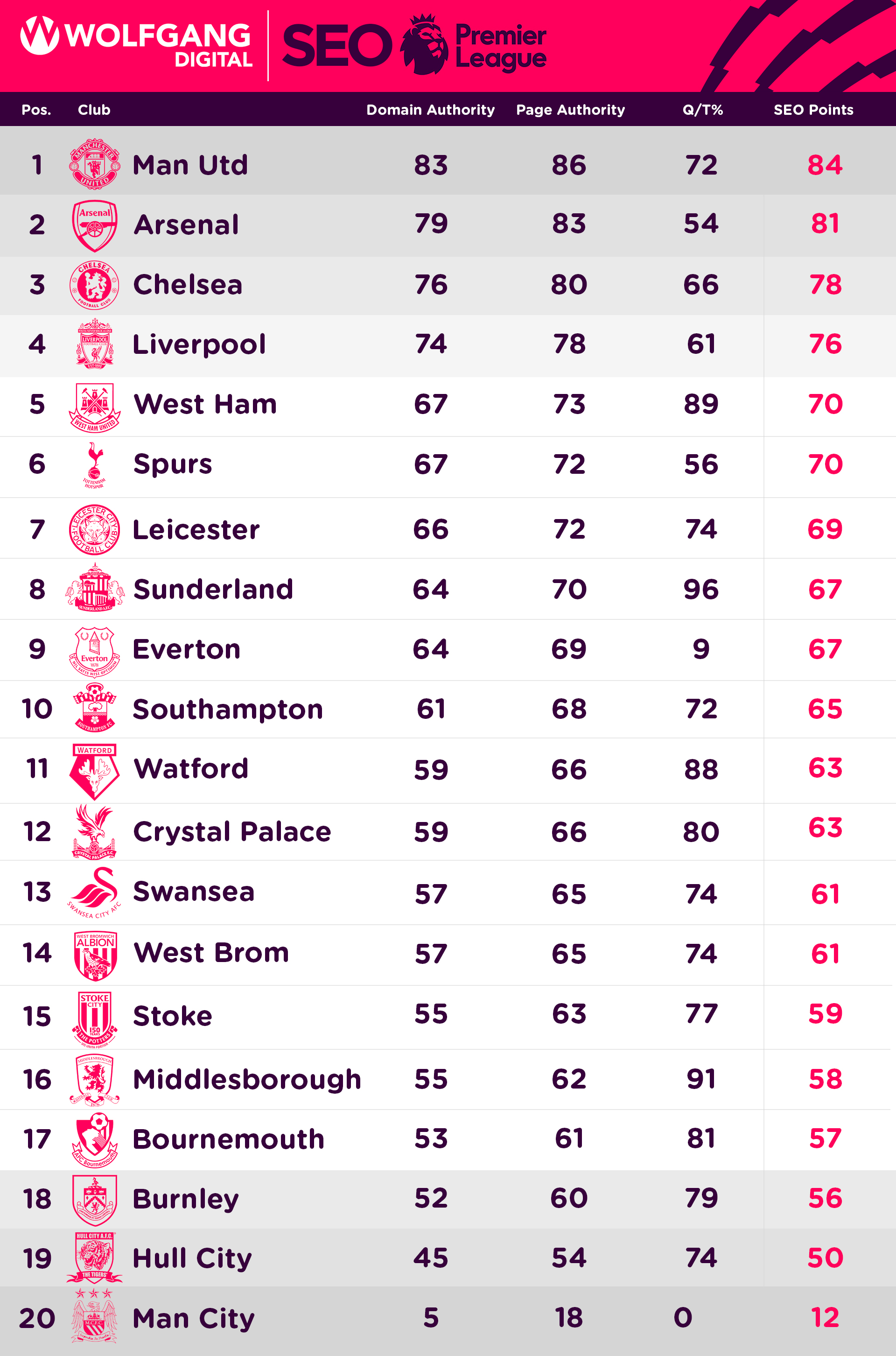 Who Wins the SEO Premier League?

For the most part, our SEO Premier League table looks like it could be somewhat prophetic in terms of where the 2016/17 Premiership’s clubs may find themselves at season’s end. In our table, Man United emerge champions. This represents a sort of search 'double' for United, with them currently the most searched football team in the world. In second place, it's a case of "same old Arsenal", with the Gunners finishing runners up in the SEO table as well as last season's Premiership. Chelsea and Liverpool finish off the top 4, while West Ham pip Tottenham and 2016 Premier League champions Leicester to the Europa League spot.

Around the mid-table, things are pretty close, with no less than seven teams finishing within a margin of only 6 points. 14th position was an exact tie, with Swansea City and West Bromwich Albion both finishing with the exact same number of SEO Points and the same quality backlink percentage. We even checked both teams’ Spam Scores as a further tie breaker, but they were even in terms of that metric too! (3 each)

If two teams were ever to finish on the same points and goal difference (taking goals scored into account as well), Premier League rules dictate that they would need to play a ‘cup final’ style playoff at a neutral ground, with the winner taking the higher position. Of course, here at Wolfgang Digital we can’t force the respective digital marketing teams of Premier League football clubs into a quick-fire SEO death match (no matter how much we try), so we awarded 14th spot to Swansea based on the fact that they finished higher in last season’s Premier League. Granted, that’s a bit of a kop out, but we figured counting social media followers in an SEO metrics-based competition might annoy certain factions in the SEO community.

At the foot of the SEO Premier League table, a lot of the teams whom many of the experts think will go down found themselves in the relegation dogfight, with AFC Bournemouth, Middlesbrough and Stoke City all finishing within 3 points of the dreaded drop zone. Burnley suffered the agonising fate of missing out on safety by a single point, while Hull City would have been relegated with more than a game to spare (serves them right for rebranding themselves as the ‘Hull City Tigers’).

The Shock of the Season?

At the very bottom of the SEO Premier League table, we find the biggest surprise of all. Despite their near endless supply of cash, legions of fans and squad of fabulous players, Manchester City are somehow the lowest ranked Premiership club in terms of key SEO metrics – and by a considerable margin too! But how can this be?

Well, during the month of July, Man City took the plunge and decided to build a new website. Now, when a site migration occurs there is often a sudden drop in both domain authority. With meticulous forward planning and adhering to best SEO practices, the DA usually shoots right back up over the course of the next couple of Mozscape API updates (which typically happen about a month apart on average). The restoration (and potential improvement) of DA hasn’t happened for Man City yet, so it will be interesting to see how (and if) they get their authority back.

However, Manchester City can’t blame all of their sub-par SEO metrics on a site migration, as there were problems beforehand as well (hence the need to move the site). Pre-site move, Man City’s DA was 54, meaning they would have finished one place higher in the SEO Premier League table, but still would have gotten ‘relegated’. It would seem that while City were spending all that time and money buying world class footballers and winning championships, they were neglecting certain aspects of their digital marketing strategy. For shame.

Manchester City’s shocking performance notwithstanding (they aren’t going to get relegated after all – that’s about as likely as Leicester winning the title… oh), the main reason why our SEO Premier League table looks like an accurate enough prediction of the Premiership is that the bigger / more successful clubs generally attract a lot more media attention and get more backlinks from authoritative world news sources as a result. They also have bigger, more authoritative, sponsors who will link to them. Hence the better Domain Authority.

Of course, as Man City have shown, a “build it and they will come” attitude toward SEO is not something you should solely rely on, even if you are a multi-national brand worth countless millions. Best practices are best practices for a reason, and it would seem that nobody is too big to fail.