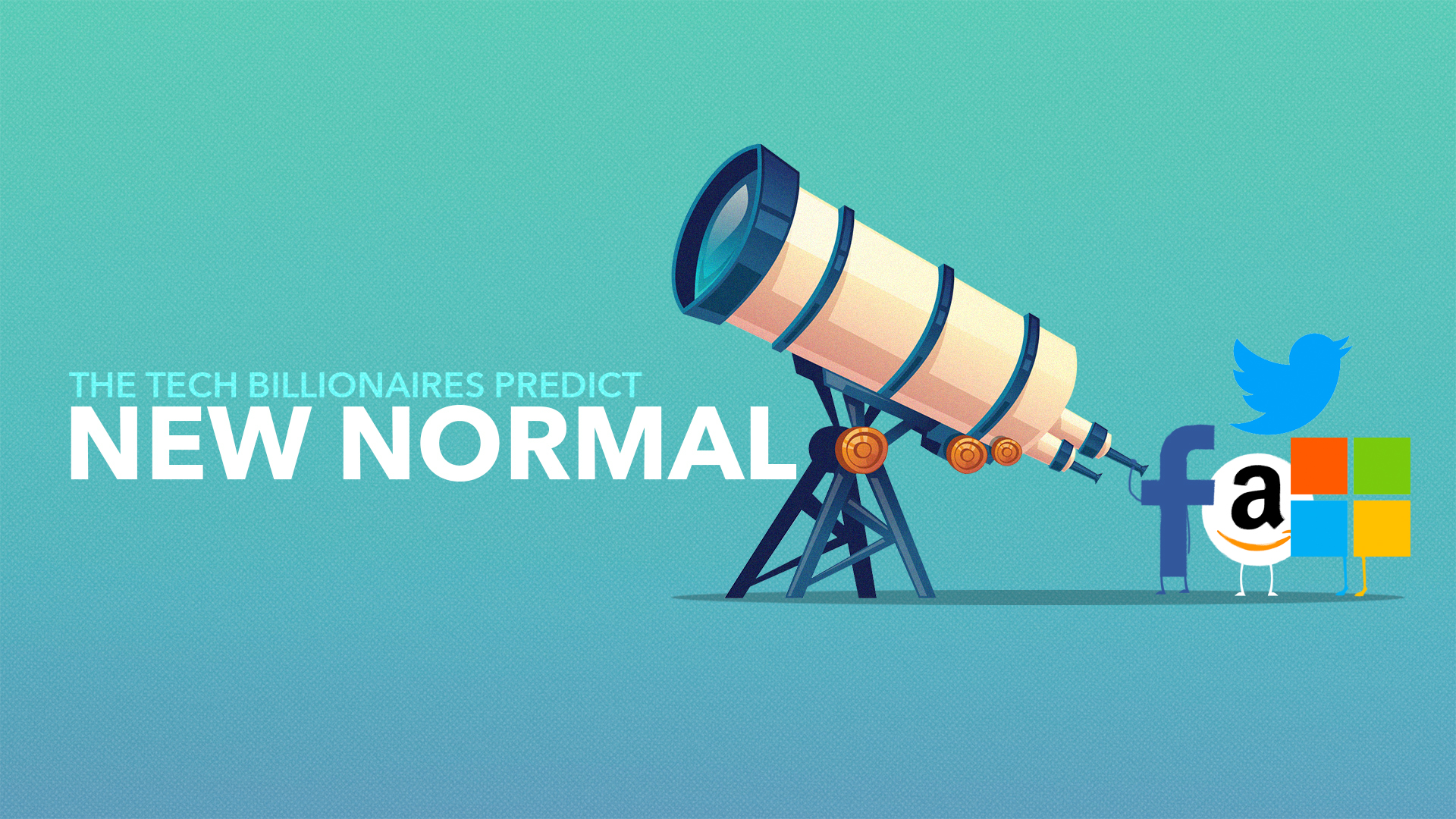 The billion dollar question in 2020 is “what will the new normal look like?”; and who better to answer that question than those who’ve made their fortune by predicting the future, the tech billionaires.

In a prescient 2015 ted talk titled “The Next Outbreak, We’re Not Ready”, Bill Gates predicted a global flu pandemic would cost millions of lives and trillions of dollars. Having predicted the current crisis, Bill’s voice’s booms with authority when he speaks as to what the new normal will look like. When Bill talks about the corona pandemic’s causes and what a post corona future looks like, global travel is consistently central to his message.

Bill has revealed that with global travel as prevalent as it is, we can expect a pandemic every twenty years. In a post-pandemic world, Bill forecasts a lot less business travel. On how to contain the virus, he states closing borders to international travel is the only alternative to lock-down. It’s clear from Bill’s public statements that he sees international travel as central to the cause and cure of pandemics.

If we were to see international travel reduce dramatically in "the new normal", how would it impact the Irish economy?

Not as badly as you might think. We actually run a balance of trade deficit of €400 million from travel. In 2018 Irish people spent €7.4 billion on travelling abroad. During the same year overseas tourists spent €7 billion in Ireland. The flow of travelers' money out of the country is currently 6% higher than the flow inwards.

If the domestic travel industry could reset it’s feet to tackle an increased domestic demand in place of international demand, it could actually be better off.

Bill is expecting us to be living in containment until at least the far end of 2021. That’s two summers with limited international travel. Clear skies and homegrown craic.

Thinking longer term, according to Bill’s 20 year pandemic cycle, pandemic crises and the resulting lock-down is a phenomenon we will experience multiple times over our career. That’s a hefty new consideration for people from boards of businesses right down to students considering careers.

Our online economy report, 'On The Money', illustrates the retail industry is going through its most seismic shift towards eCommerce in its 20 year history. With a 44% share of US eCommerce, Amazon is a safe bet to be one of the main beneficiaries. Never one to waste a crisis, Founder Jeff Bezos has just made one of the biggest bets in the history of Amazon. The only larger investment than this was the acquisition of Wholefoods. Jeff is going to invest all of Q2's earnings, an expected bumper $4 billion dollars, on Covid-proofing his supply chain. Just to give this $4 billion figure context, the World Health Organisation budget for 2018 was...wait for it... $4 billion dollars! Jeff is investing an intergovernmental agency's annual budget to secure his business operations. Jeff is always thinking at least two steps ahead. Once the supply chain is Covid secured, are Amazon customers next? Do Prime customers get preferential access to Amazon tests and PPE?

Jeff is famous for being a long-term oriented person. It doesn’t take Sherlock Holmes to deduce from this gargantuan investment that Jeff is not expecting retail in pandemic circumstances to be short lived, nor once-off.

When the world’s two richest people, Jeff Bezos and Bill Gates agree on a prediction that is at odds with the general opinion, the rest of us might need to think again.

Transformative practices are taking place at Twitter and Facebook too. The social media giants’ reason for being, is to connect people virtually. This shared purpose endows them with a deeper understanding of the nature of the remote workplace. So what can we learn from their responses to lock-down? Jack Dorsey announced in early May that remote working had been a success and Twitter workers could work remotely forever if they found it made them more creative or more productive.

Facebook has form in permanently disrupting tech industry work practices. When Sheryl Sandberg left Google for Facebook she boldly broke the shady wage theft agreement between the “Techtopus” of Google, Apple, Adobe and others.This led to a $300+ million fine from President Obama’s Department of Justice and was the formative moment of the famous bumper packages on offer in tech companies today. So given this history of disrupting work practices in the tech industry, how is Facebook thinking about remote working?

Mark Zuckerberg has announced that just like Twitter employees, Facebook employees can now work from home forever too, however, their salary would be adjusted according to where they choose to live. This means Facebook isn’t paying Dublin city wages to employees paying Strandhill rents. In a weighty prediction, Zuckerberg announced he expects half of Facebook’s staff to be remote working in 5 -10 years.

The Tech giants have made an indelible impression on the architecture of San Francisco, Dublin and the other cities in which they operate. The long term ramifications of half their workforce going remote are consequential for life in those cities.

One of the most consistent economic trends since the industrial revolution has been rural to urban migration. Poor people moving from the countryside to the cities to gather around the machines of production and in doing so increase their income. The shift towards remote working will see large swathes of the world’s best paid employees moving in the other direction, from cities to suburbs and further afield.

The industrial revolution placed the machines of production in urban centres. As the result of the informational revolution, the machine is now piped and transmitted everywhere. The means to remote work has been in place for many years. It took a pandemic to reveal this new reality to the working world, and for us all to experience that you can be productive anywhere. Jack Dorsey believes people can actually be more productive remotely. To what extent will this remote working vision of the social media giants extend across the global workforce?

At Wolfgang we expect remote working to follow a similar path to online retail. It won't replace it’s offline counterpart entirely but it will grow in share as long as it continues to create incremental value for the worker and the organisation.

Another visionary concerned with the movement of people is Elon Musk. His highly successful electric car company Tesla is combating climate change by “accelerating the world's transition to sustainable energy”. Elon is hedging his bet on saving planet Earth with another company, Space X whose mission is to colonise Mars.

In the momentous month of May 2020, Elon Musk’s Space X Falcon 9 rocket became the first private enterprise to send humans into Space.

This was his first step towards colonising Mars. It sounds batshit- crazy doesn't it? But so much about 2020 has been batshit crazy.

Will life ever be the same again post-Covid? What will the new-normal look like? Crises accelerate some prevalent trends and give momentum to some nascent ones. It’s clear from the actions of the Tech Billionaires that they believe how we shop, work and travel are changed forever.

The 2003 SARS crisis in China accelerated eCommerce to their current position as the world’s most advanced eCommerce economy, with 36% eCommerce penetration. The Covid crisis will act as a rocket engine to propel online shopping habits globally. Post-Covid the flagship store will not be on the high street, it will be online.

Just as SARS incentivised China to learn to shop virtually, Covid has incentivised the world to learn to work remotely. Even if a small share, such as 10% of work is still taking place remotely in 10 years, that would be transformative for the environment, society and the economy. Visionaries Sheryl Sandberg, Jack Dorsey and Mark Zuckerberg are now committed to delivering this possibility forever for their workers.

In 2020, every passenger who boards a plane continues to face increased security 20 years after the events of September 11th. Could the Covid crisis have as lasting an effect on international travel as the Sept 11th crisis? Bill Gates thinks so.

If we do become locked out of Majorca, thankfully we’ll still have Elon to fly us to the moon.