So first up, does site speed matter? It does to Google! Google founder Larry Page is famously obsessed with speed. Way back in 1996 before Google was called Google, Larry hypothesised that the faster Backrub (as Google was initially called) results load, the more the search engine will be used. This mission for speed dictated the minimal search page design which the world is now so familiar with.

Larry’s obsession with speed has transcended Google’s digital products. When a Googler is setting up a presentation and the room is waiting Larry can be heard counting loudly

While staring blankly at the wall, until the presentation is ready to go. 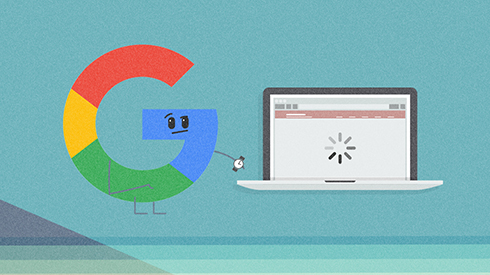 This is significantly slower than the 2 second threshold for e-commerce websites recommended by Google. Amazon’s research into site speed found that every one second delay reduces conversion rate by a whopping 7%.

Site speed is not only a conversion factor it’s a Google ranking factor. So when we talk about optimising site speed we are talking about a dramatic “multiplier effect” on revenue, from the combined benefit of more traffic coupled with a better conversion rate. For this reason, optimising site speed seems to be a no-brainer for performance focused digital marketers.

You can read the full E-commerce Benchmarks 2016 study here.  Or check out the easy to digest infographic here.