Today I wanna talk to you about the twin monsters devouring the ad industry as we know it. I'm talking, of course, about Google and about Facebook. In 2017 they turned over 150 billion dollars between them representing two-thirds of all the money spent online. Some analysts are saying they're actually the only digital platforms that are growing revenue-wise. Everyone else is stable or in decline. They're just eating everybody else's ad spend. So, I want to spend the video interrogating the reasons why. What is it? What are the common denominators between these two companies that have set them off on this phenomenal trajectory?

The first commonality I want to discuss is innovation. At the end of April 2018 I took it upon myself to count, to measure the rate of innovation of both companies and what I found that so far this year, Facebook was averaging one new ad feature every month, which is pretty fast paced. Google, in a rapid flurry of innovation, has actually introduced one new ad feature every week. There have been 11 new ad features released in Google AdWords in 11 weeks. Unbelievable. This is central to why the two companies are doing so well, their platforms are always evolving, always getting better, always improving.

Demonstrating to advertisers that the clicks "we" generate for you turn into customers. And this is one of the key reasons why advertisers are emboldened to move more and more budget to Google and Facebook.

Just to give you some examples of those conversion focused innovations, we can look at Google Shopping and we look at huge innovation, very valuable in retail, Facebook's equivalent is dynamic product ads, then they built a broad match on top of that. Both Google and Facebook have got their own versions of the shoppable video. Perhaps the most exciting innovation of last year, of 2017, was ROPO - Facebook leading the way on this one. ROPO leads people to look at the online influence in in-store sales. And of course, we all that for every sale we make online there's three, four, five happening in-store. This is really shining the light of conversion on an area that was dark before.

I think it needs to be shouted from the rooftops that Sheryl Sandberg is probably the most important, most influential person in the advertising industry right now. She's very much lauded for her philanthropic work, and it's brilliant what she's doing - the books she's published are fabulous. But I think she deserves more attention for being a central part of building the sales and marketing for the machines that are Google and Facebook.

So what do you think?  I'd love to hear your thoughts on all of that. Do you have any other reasons, any other ideas on why Google and Facebook are absolutely devouring the ad industry as we know it? Is Sheryl Sandberg the most influential person in the advertising industry right now? Perhaps ever. I'd love to hear your thoughts. The hashtag for conversations is #WolfgangBites. I'll be on Twitter on Wednesday and Thursday to talk to you there.

If You Liked That 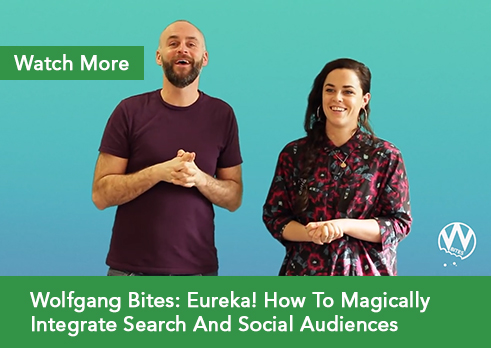